If you haven’t heard of beer can chicken yet, boy are you missing out, so let me get you up to speed.

It basically means roasting or grilling a chicken with an open beer can stuck up inside it.

Rocket science, am I right? But although the concept is simple, the rewards (and how it looks) are totally worth it. 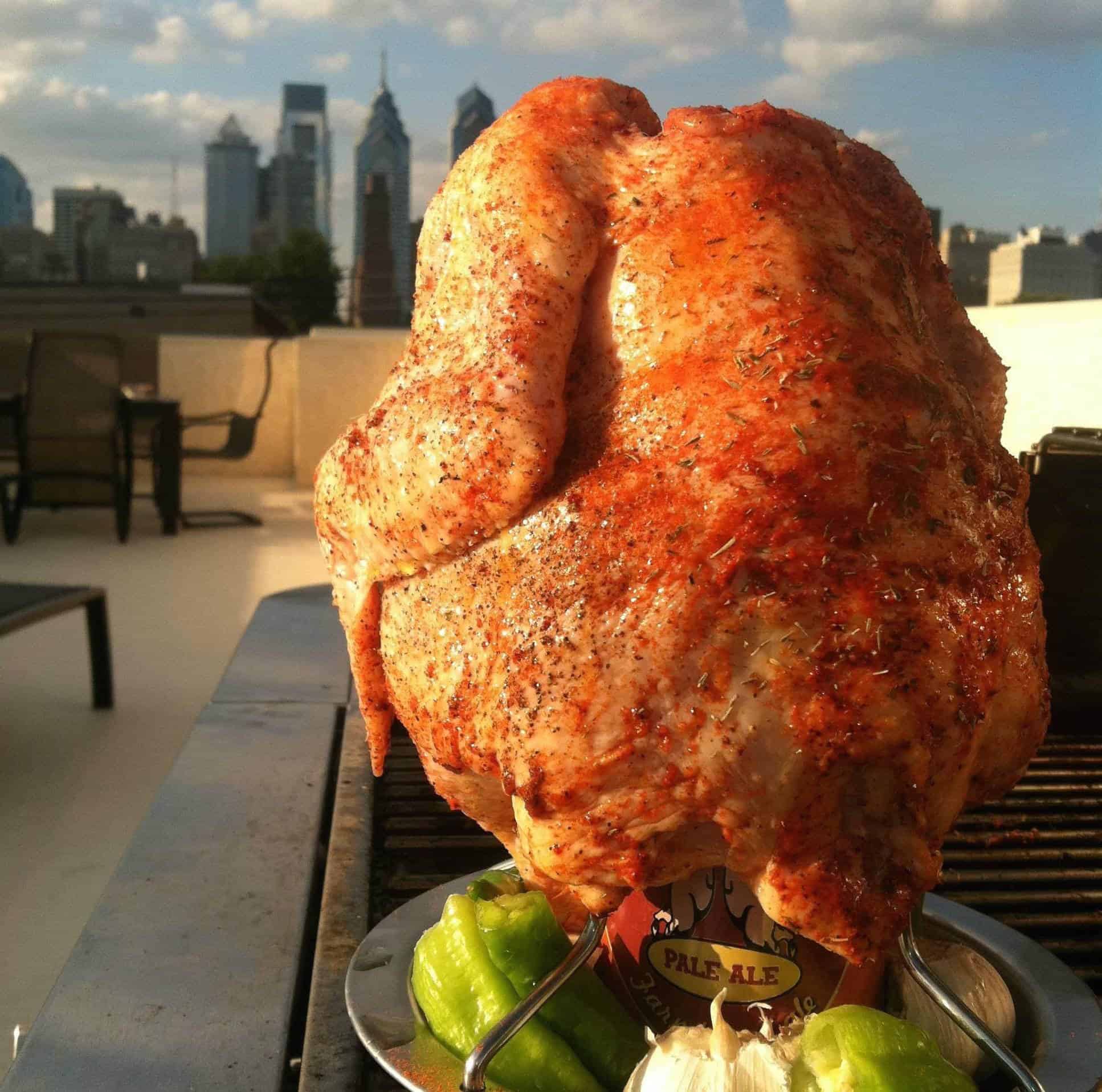 The benefit to this unusual, almost too obvious way to cook chicken comes from the venting and containment of moisture throughout the roasting of the bird. Steam goes out, moisture stays in. A great concept to be sure, but not all BCC’s are prepared equally. 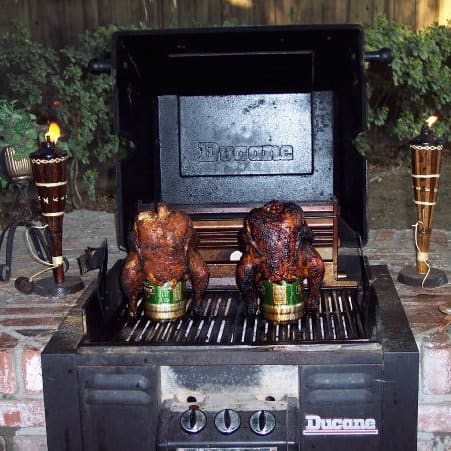 Dating back decade after decade, this form of poultry-poached roasted goodness has been used in cookouts and homes across America. The techniques for pulling off the perfect beer can chicken have been debated hotly as well. 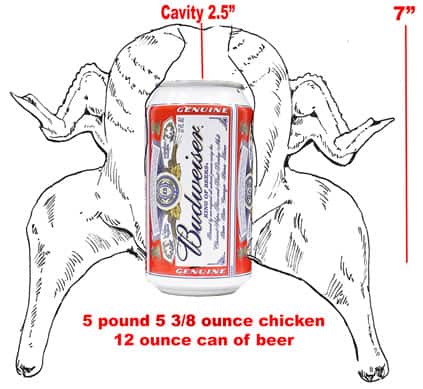 Some say by filling the cavity completely with beer creates a “cool zone” that compromises complete and even cooking. Too much beer, it’s said, doesn’t have the time or the room to heat properly. Although the answer to this is often the obvious “cook it longer,” there are easier fixes. 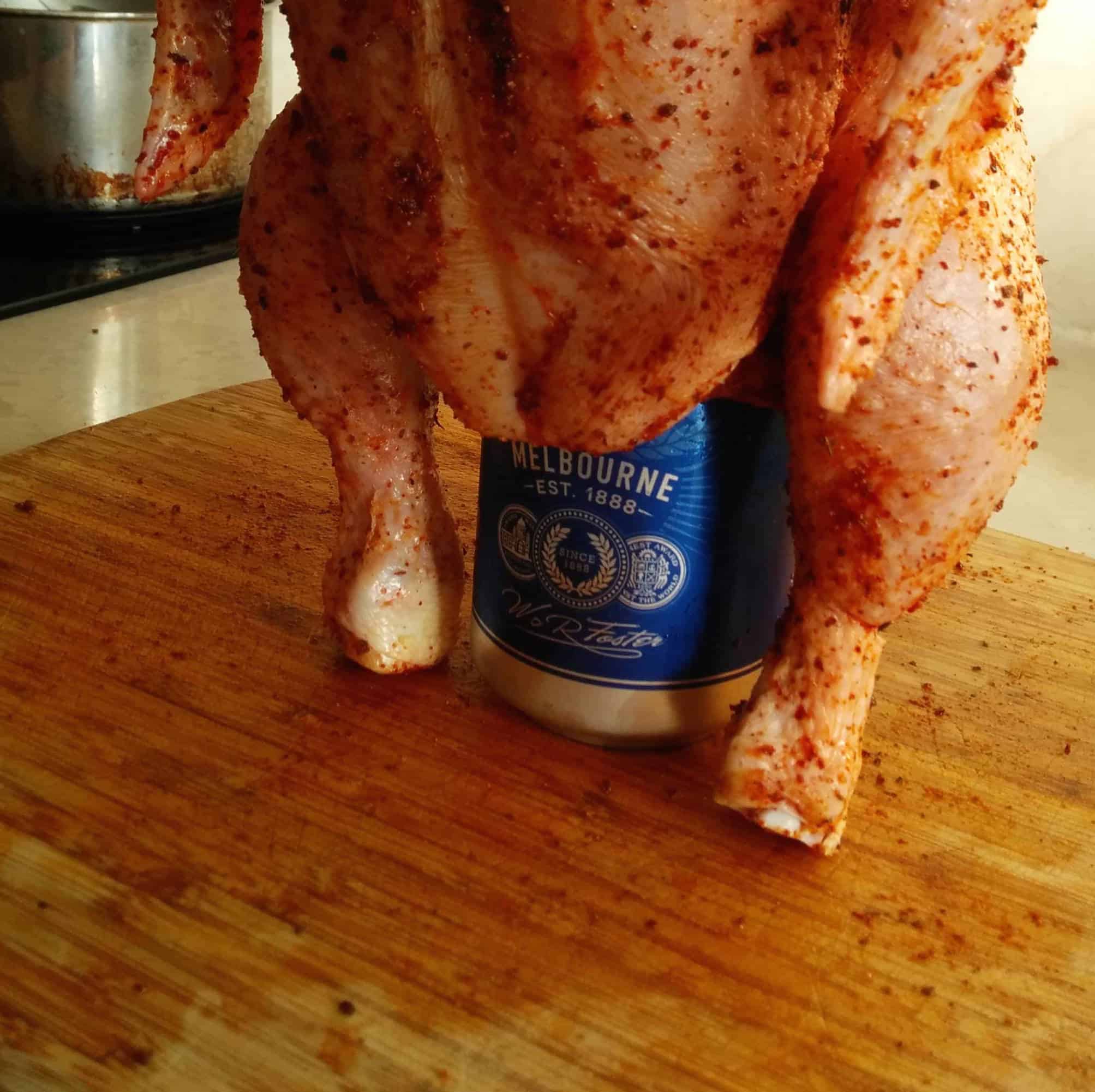 The way I prepare mine is to drain about half of the beer and poke a few holes around the top half of the can. I usually buy about 4-5 pound whole chickens at Vons or Whole Foods (or just use the bird i got via Home Chef.) This ensures more steam will make it into the meat, while allowing the beer and the air remaining in the cavity to rise to an appropriate cooking temperature. 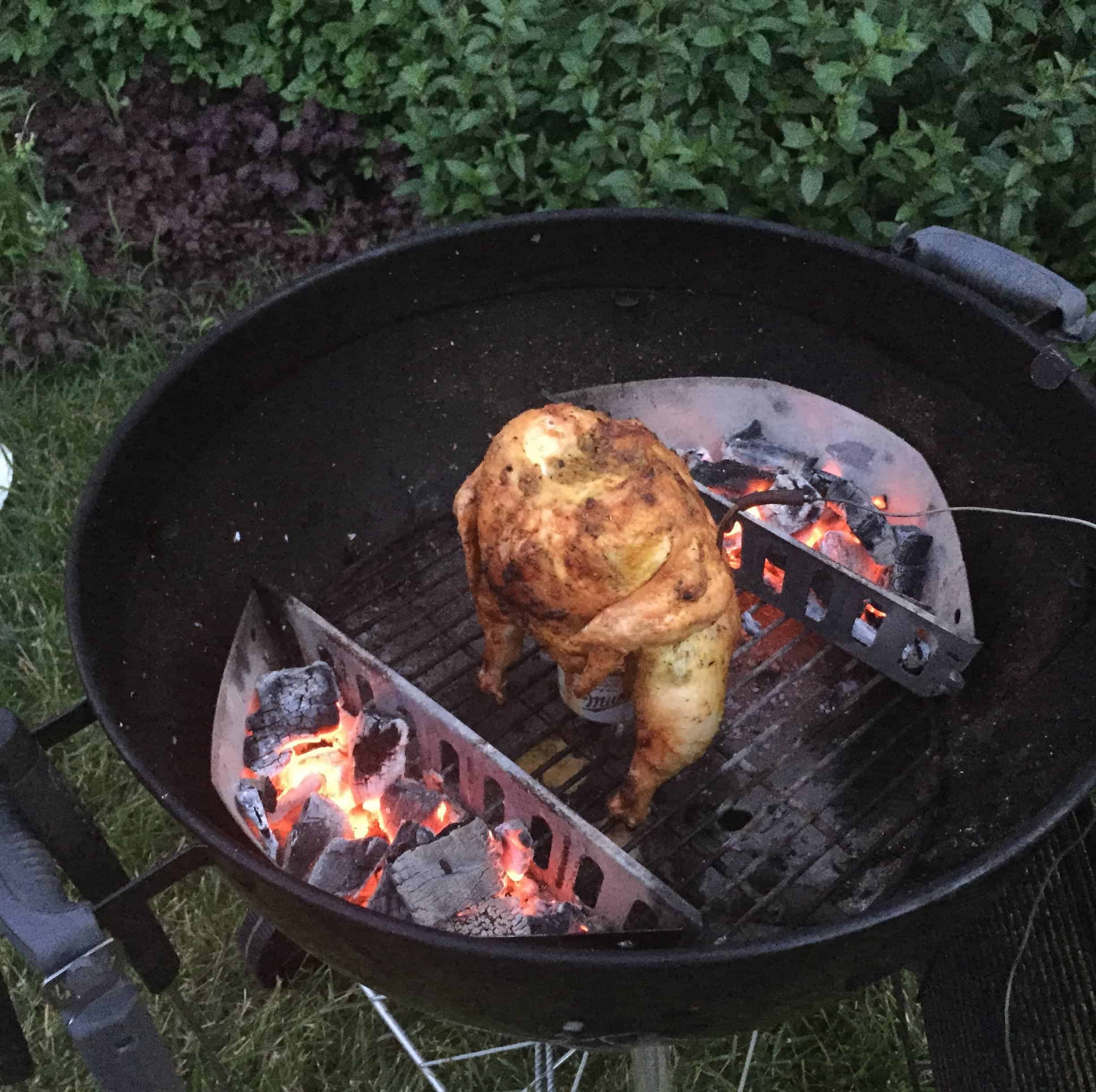 You can either use an oven or a covered grill to cook. In my case, I prefer a low-to-medium heat charcoal grill with a cover, as well as some foil around the bird to contain heat. The best BCC I’ve ever made came from cooking on lower heat for about 4 hours (the longest so far.) The meat simply fell off the bone when I prepared it this way, so I would recommend allowing as much cooking time as possible. 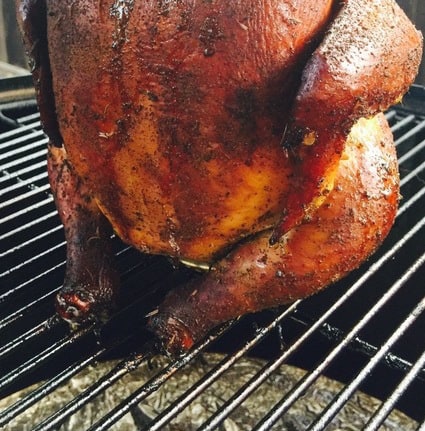 It’s always a good idea to use a meat thermometer on poultry, but beer can chicken can be especially fickle. When you are ready to take it out, take the temperature often and aim for 165° F for white meat and 170° F for dark. I’ve, more than once, cut into a BCC I thought was done, only to find it raw on the very, very inside. 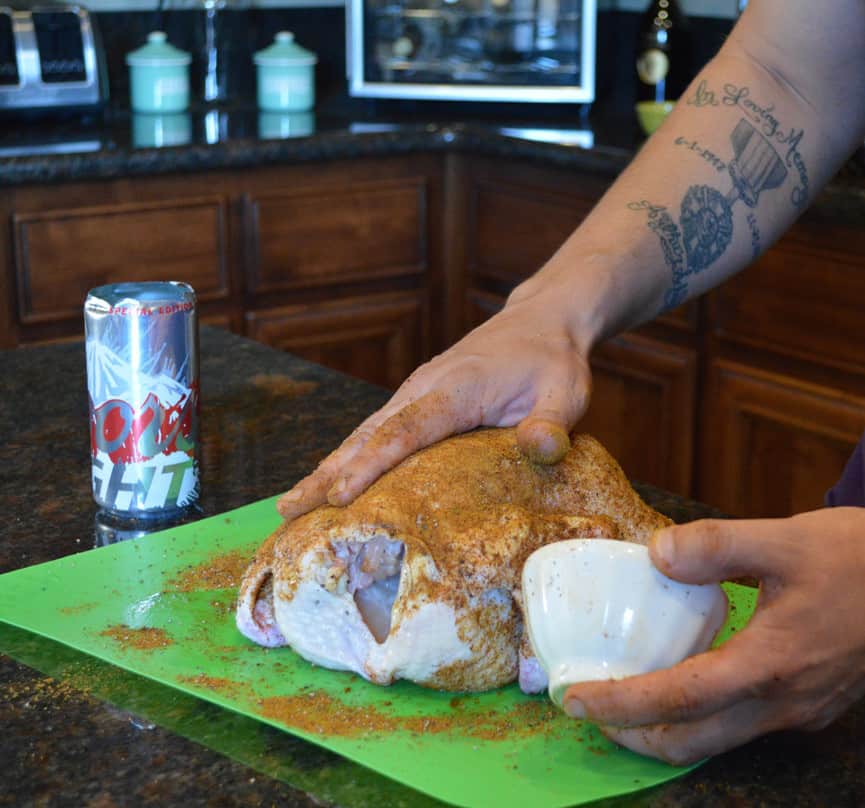 I usually prep by rubbing the inside and out with light olive oil and butter, followed by GENEROUS spices (for me: salt, pepper, chili powder, paprika and parsley) on the skin and inside the cavity of the bird. For beer, I usually go with a light beer that I’ve ordered from Drizly. If you don’t want to use actual light beer, a great pilsner or wheat beer does great (try to avoid heavy beers like stouts and ales.) 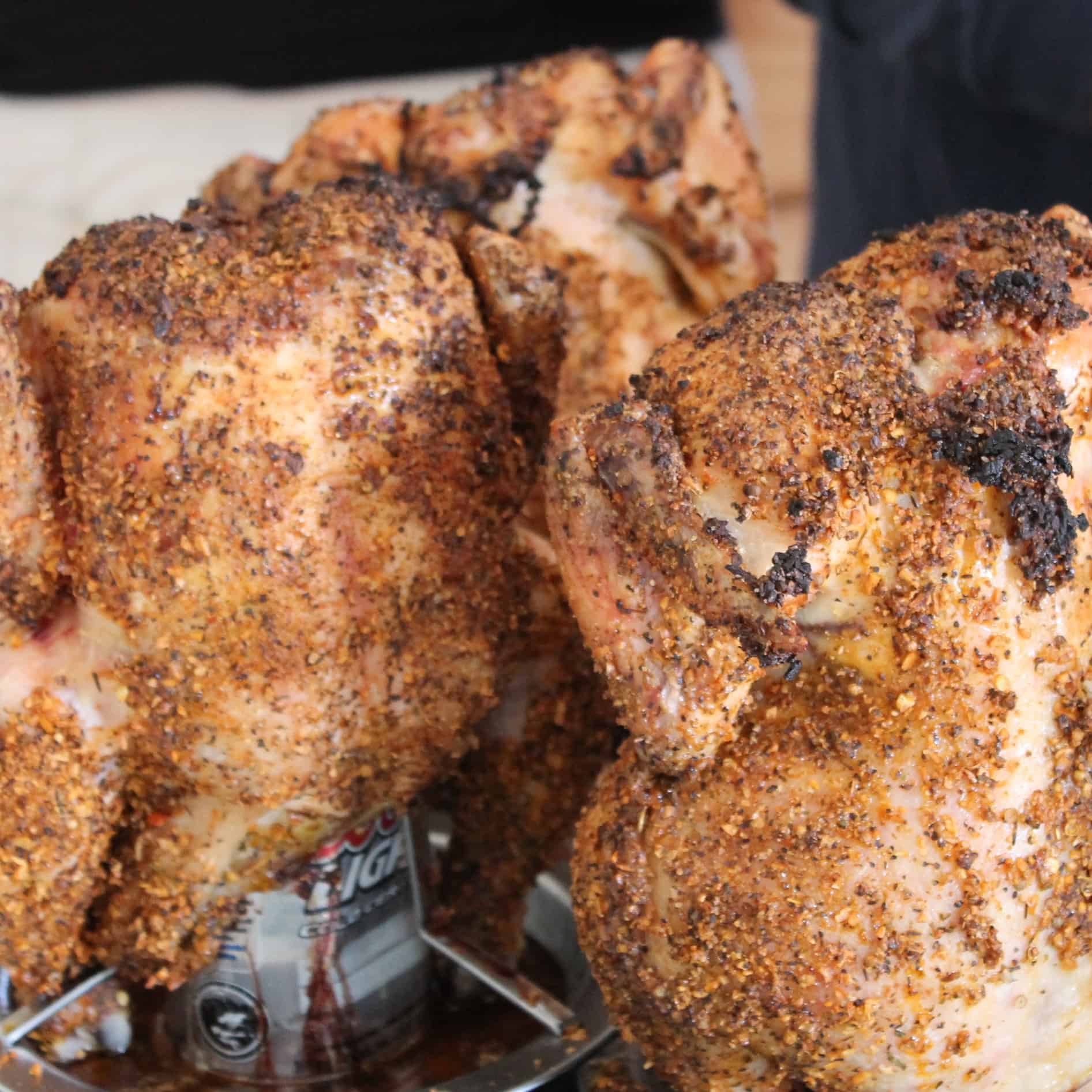 And finally, BE CAREFUL if you ever decide to cook your own beer can chicken. Keeping the bird upright during roasting is hard enough, but removing a scalding hot beer can from a cooked bird can be downright dangerous. The best thing to do is have a friend help you by pulling it out with protective gloves while the chicken is held aloft. Then, let the bird rest for 5-7 minutes before carving. Serve immediately and enjoy.